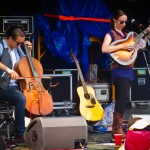 Well, when there’s an outdoor festival, you’ve always got to expect the unexpected, and for a second year in a row, Forecastle got the unexpected shoved at it.  Thanks, weather.  But more on that later. The day started uneventfully enough as I went to see Sarah Jarosz perform.  There was quite a sizeable crowd for her, […]

Here are some songs I played on the radio on Saturday afternoon. I’m back in my regular time spot on Friday night on Chicago’s own CHIRP Radio, albeit with an extra long turn at the controls — join me for my regular 8-10 pm show, stay for the bonus tracks from 10 pm to midnight. […]

Thanks for tuning in to an extra special edition of my show this morning. Hear my delightful music selections every Friday night on Chicago’s own CHIRP Radio, from 8 – 10 pm Central time. 11:54 AM Mi Ami Bells from Decade (100% Silk) 11:49 AM Bill Callahan America! from Apocalypse (Drag City) 11:44 AM Fitz & […]

Hey, everyone, it’s Wilco week! I’m not going to any of the shows, but I’m sure plenty of you are. I’ll be at Schubas on Saturday night for Noam Pikelny and friends. Banjo! If you’re not doing anything on Sunday night, my band, Jungle of Cities, is playing at the Abbey Pub. We go on […]

There’s this little thing called Lollapalooza that’s going on this weekend. I won’t be there this year (unless I happen to find someone selling a very cheap ticket), but I’ll admit that I’m looking forward to not being outside in the heat all day. Monday, August 1 Robbie Fulks, Robbie Gjersoe; Hideout. 7 pm, $10 […]