The blog’s been quiet lately — sometimes life gets like that, you know — but I’d be remiss in not popping back up to share with you a new song from Whitehorse, the combined husband-wife duo of Luke Doucet and Melissa McClelland. I don’t have much, but I am a rich man. Like all of […]

If you weren’t listening last night, you missed out on some old timey country gospel. Â That’s right. Hear my delightful music selections every Friday night on Chicagoâ€™s ownÂ CHIRP Radio, from 8 â€“ 10 pm Central time. Â If you missed Friday’s show, catch an extra special bonus edition of my show tomorrow morning from 9 am […] 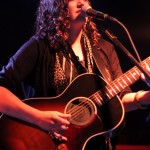 Lots of great music this week, including plenty of local artists for your enjoyment. Â I’ll be at Whitehorse at Schubas on Saturday, and may make time after my radio show on Friday to head to the Empty Bottle for The Twilight Sad. Â Their new album is really fantastic. Monday, February 27 Robbie Fulks, Steve Frisbie; […]

I got through a four hour show without once mentioning the fact that it was Friday the Thirteenth. Â You can thank me later. Next week, I’ll be back to my normal-sized two hour show, nothing to worry about. Four hours of me is a lot to take. 11:54 PM John Aler & Gino Quilico Les […]